About Eye Exams and Diabetic Retinopathy 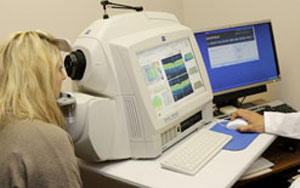 Diabetic retinopathy is a complication of diabetes characterized by a weakening of  blood vessels in the  retina so that they leak, causing the retina to swell, bleed,  and become deprived of oxygen and nutrients, ultimately leading to vision loss.

It is well documented that tight blood sugar control delays the onset and slows the progression of diabetic retinopathy. It is also important for patients with diabetes to help reduce their risk of developing diabetic eye disease by not smoking, lowering their cholesterol and lipid profile, and controlling blood pressure, as well as working to eat a heart-healthy diet rich in fish, fruit and green leafy vegetables, and exercising. With early diagnosis and treatment, progression of diabetic eye disease and its associated vision loss can at a minimum be slowed, and in many cases vision loss from diabetic retinopathy can be prevented. 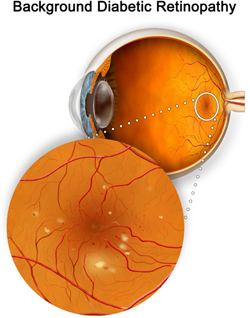 Severe Nonproliferative Retinopathy is the next progression of diabetic retinopathy. Severe Nonproliferative Retinopathy is characterized by a significant number of small blood vessels in the retina becoming blocked. As a greater number of blood vessels become blocked, it results in more areas of the retina being deprived of nourishment and oxygen. A lack of sufficient oxygen supply to the retina results in a condition called “Retinal Ischemia”. To attempt to compensate for “Retinal Ischemia”, these areas of the retina send chemical signals to the body to stimulate the growth of new blood vessels in order to try and reestablish the supply of oxygen. 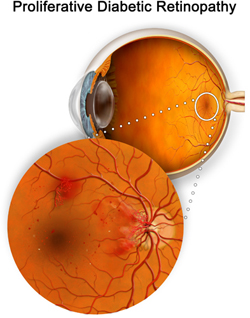 It may be possible for patients to have Proliferative Retinopathy and Retinal Neovascularization and yet still have good vision. Even if Proliferative Retinopathy and Retinal Neovascularization do not appear to be causing any vision loss, it is critical that you be treated as quickly as possible in order to stop the progression and preserve vision.