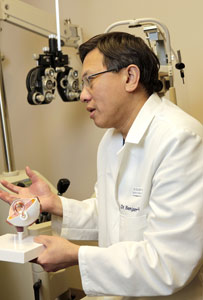 Regardless of the cause, the various types of glaucoma have something in common…if not diagnosed early, treated properly and controlled, it will result in permanent vision loss and potentially blindness.

Glaucoma is one of the leading causes of blindness for patients between the ages of 18-65 years of age. It is estimated that approximately 3 million people have glaucoma, yet only half of these actually know that they have it. In the United States alone, there are approximately 100,000 patients who are believed to be legally blind from glaucoma.

About Glaucoma Risk Factors
Age & Glaucoma Risk
There is a direct relationship between age and the likelihood of developing glaucoma. Baby boomers and seniors should note that the risk of developing glaucoma increases for those over the age of 40 and is 6 times greater once you are over 60 years of age. If any family member, especially a sibling, has glaucoma your risk increases 4-9x. This is even greater if you have other systemic or ocular diseases that compromise circulation, such as diabetes or high blood pressure. Oddly, patients who take medication for high blood pressure may be at greater risk for glaucoma as a result of the medication lowering the blood pressure and thus decreasing circulation within the optic nerve.

Race, Ethnicity & Glaucoma Risk
Race and ethnicity also affect glaucoma risk in that African-Americans have a genetic predisposition that exposes them to a 6-8x increased risk.  Patients of Hispanic descent over the age of 60 also seem to be at increased risk.  Asians appear to have higher risk for developing a type of glaucoma called narrow angle glaucoma.

Other Glaucoma Risk Factors
Certain patients who are severely nearsighted have a higher risk of developing glaucoma due to anatomical features that can increase their risk. There is now the suggestion that prolonged use of oral contraceptive birth control pills, as well as the early onset of menopause, may increase glaucoma risk in women. Anyone suffering from sleep apnea needs to be carefully examined as this condition significantly increases glaucoma risk. Researchers, reporting in the journal Ophthalmology, the official publication of the American Academy of Ophthalmology, found that obstructive sleep apnea is not simply a marker for poor health, but is actually an independent risk factor for open-angle glaucoma. Finally, if you have had trauma to your eyes such as from a sports injury or car accident, or if you have been treated for asthma or other conditions for long periods of time with steroid inhalers, or have a corneal thickness less than 0.5mm, you too might be at greater risk of developing glaucoma.

How Often Should I Have an Eye Exam with Glaucoma Testing?
At D'Ambrosio Eye Care, we recommend that all patients over 50 years of age who have no previous family history of glaucoma or other general health conditions such as diabetes or high blood pressure, be evaluated for glaucoma every two years. If there is any family history of glaucoma at all, or there any other general health problems, we recommend patients be evaluated for glaucoma every year beginning at age 40.

If you or someone you know would like to learn more about glaucoma, glaucoma symptoms or their risk of glaucoma please schedule a glaucoma eye exam by calling D'Ambrosio Eye Care at 800-325-3937 to schedule an appointment.